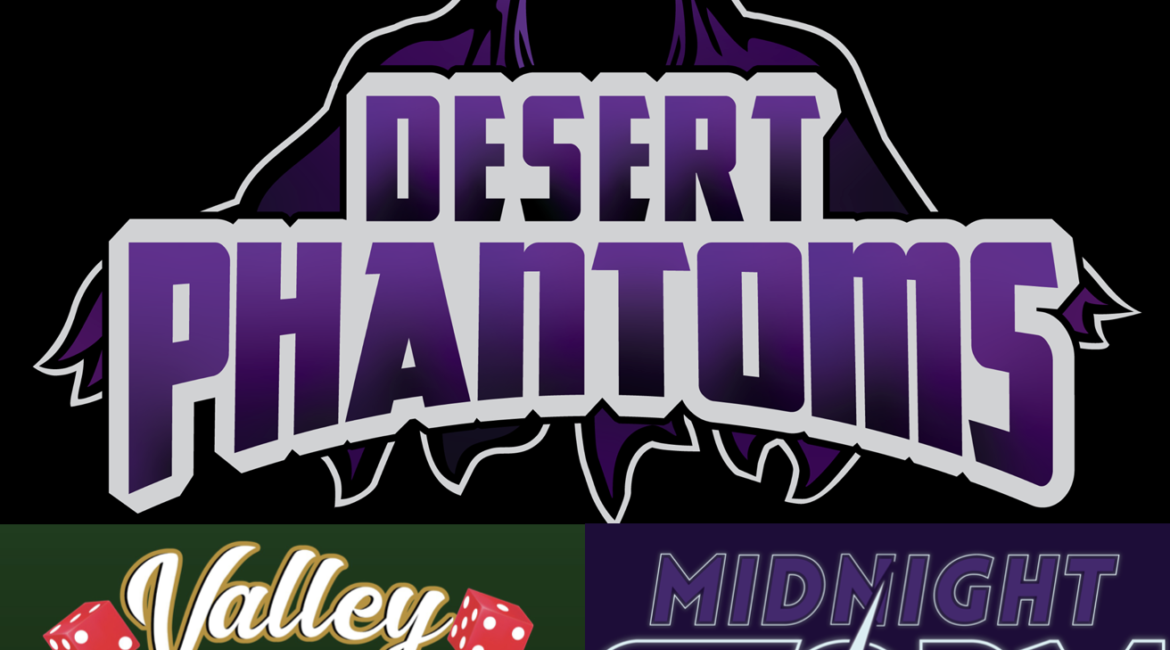 PHOENIX, AZ – Arizona Roller Derby, as it celebrates its 16th season of bringing highly competitive flat track roller derby to the valley, is excited to introduce three new teams to its existing roster of Nation, State, and City-level teams.  The Valley Rollers and Desert Phantoms, formerly known as the Gaudylupes and Brawlarinas, represent AZRD in City-level play, while Midnight Storm, created out of the expansion of the league, represents AZRD as its fourth team competing in the Arizona State Conference. The Arizona State Conference includes teams from WFTDA leagues in Phoenix, Tucson, Flagstaff, Prescott and Yuma. It will be held October 2019 in Phoenix, AZ.

Desert Phantoms and Midnight Storm have each debuted on the road, playing Casa Grande Roller Derby Big House Bombers and Tucson Roller Derby Furious Truckstop Waitresses respectively.  The Valley Rollers will debut at home on May 11.

Committed to inclusivity and fostering a culture that represents all its athletes, AZRD looked at re-branding its City-level teams, formerly the Gaudylupes and Brawlarinas.  Similar to the work done to re-brand AZRD’s travel teams, the league listened to feedback from its members and launched the re-branding initiative. After field many name options and allowing the skaters to vote on the new teams, The Valley Rollers and Desert Phantoms were born.  These teams are comprised of skaters honing their skills through practice and competitive play and act as the farm teams for AZRD’s State teams. Donning green and gold, the Valley Rollers compete locally, with the majority of their games for the 2019 season scheduled in Phoenix against the Desert Phantoms, sporting purple and silver.

With the promotion of many City-level athletes to State-level in the 2018 season, coupled with a large number of transfer skaters from other leagues, AZRD realized its structure of having three State-level teams could no longer support the number of athletes it had to compete at that level, so Midnight Storm was created.  The creation of a new State team resulted in a shake-up of the rosters for the existing State teams – the Surlies, Bad News Beaters, and Skate Riot Project. AZRD’s Sweet Sixteen Season will not only bring a new State team to the valley, but will also bring a different look to those that have been competing here for years. Arizona Roller Derby is excited to share its growth and changes with its community as it celebrates its Sweet Sixteen. With nine competitive teams, AZRD has a full schedule for 2019, which can be found here.  All home games are held at Ability 360, located at 5031 E Washington St, Phoenix, AZ 85034.

Arizona Roller Derby (AZRD) was founded in 2003, it is the second-oldest flat track leagues in the world. We are a skater-owned/skater-operated 501(c)3 non-profit organization composed of skaters, officials, coaches, and volunteers. AZRD is also a charter member of the Women’s Flat Track Derby Association (WFTDA), the only international governing body to regulate interstate play for flat track roller derby. Our mission is to foster the international sport of women’s flat track roller derby as a skater-operated organization. AZRD welcomes all genders, sexual orientations, races, and religions.