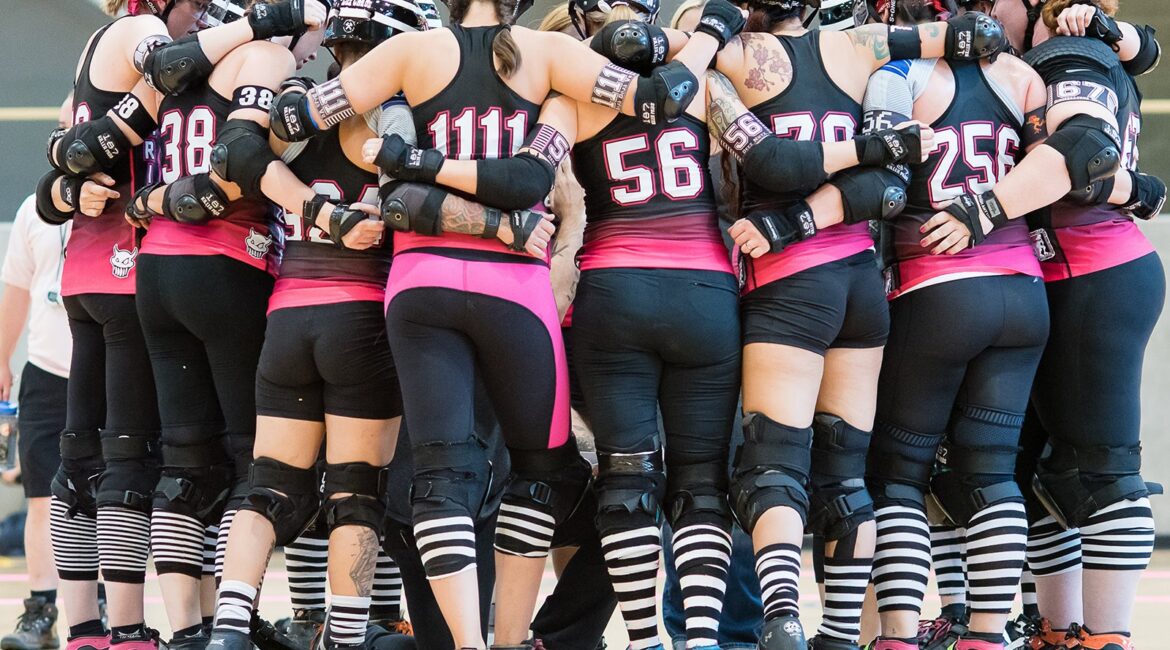 PHOENIX, ARIZONA – Founded in 2003 at the forefront of the roller derby revival, Arizona Roller Derby (AZRD) and the sport in general, embraced a DIY spirit that has widely been associated with a “punk rock” mentality and aesthetic. Participants selected “derby names” which typically included puns related to the sport, allusions to pop-culture, and double entendres. This was also true of the teams which had historically been associated with a theme. Often, the names and uniforms were selected with the intention of creating a tongue-in-cheek reference to the wider culture, and at times, were explicitly intended to be provocative.

In 2004, AZRD agreed to play the Texas Rollergirls (TXRG) in the first interstate-bout of the modern era. As part of creating its first All-Star team, AZRD members selected the name Tent City Terrors, a satirical political statement in reference to Arizona’s notorious outdoor prison. Many of the skaters on the original team selected a second identity separate from that of their home team, such as “Sheriff Shutyerpaio”. The uniform was a striped blouse, striped skirt, and pink underwear–references to the clothes given inmates within the Maricopa County Corrections system. When it was formed, it was unclear when or how many more games the team would play; at the time, there was no flat track organization nor rule set. Still, the name and uniform stuck through the first national tournament held in 2006, and has been used by the team since.

As the sport of roller derby has evolved, so too have meaningful conversations about the sport. Leagues across the country have debated every aspect of the game from how it is played to how it is marketed. Those changes represent not only the evolution of the sport, but the development of a culture that values true athleticism and high-level competition. Through that process, the women of AZRD have elected to let many historical elements that distract from the sport fall away. While the name Tent City Terrors very much fit the general spirit and ethos of the league when it was created, it was decided at the end of last season that the name no longer held relevance to the skaters (beyond its historical usage) and would be phased out this season.

In doing so, the league will continue to respect growth as its most important characteristic and shift the spotlight back to the league’s most critical function: to foster the international sport of women’s flat track roller derby, the sport we love. Please join us in celebrating the evolution and athleticism of our skaters by cheering us on at the 2017 International WFTDA Division 1 Playoffs in Dallas, Texas, Sept. 22-24.

ABOUT ARIZONA ROLLER DERBY: Arizona Roller Derby (AZRD) was founded in 2003, it is the second-oldest flat track leagues in the world. We are a skater-owned/skater-operated 501(c)3 non-profit organization composed of skaters, officials, coaches, and volunteers. AZRD is also a charter member of the Women’s Flat Track Derby Association (WFTDA), the only international governing body to regulate interstate play for flat track roller derby. Our mission is to foster the international sport of women’s flat track roller derby as a skater-operated organization. AZRD welcomes all genders, sexual orientations, races, and religions.